the island of me

he wears the smell of blood, and death, upon him, as if it were a perfume. the scent entices me upon him entering the carriage. it draws me to him, dark and cold. the death is new, but also old, a sign of a longtime…memory? a death committed long ago, but still raw. he sits in the empty seat across from me, smiles over at me. it’s a sad smile. soft, gentle, like a slow piano mix on a rainy night. it calms me but i don’t smile back.

he makes no attempt to remove anything from the small bag now seated beside him on the bench, just sits there. sits there and watches. watches the quiet, empty meadows flick past outside. his shoulders have dropped now, but the smile is still there. if one didn’t look hard, watch close, he would come across as happy. but he comes across, in reality, as calm, soothed, but sad. it’s as through there’s a memory haunting him still. a long passed memory that he cannot get over. he reeks of death close up, and yet, the scent isn’t fresh. it’s old. very old. the death has long since been, the body buried long ago. but it’s kept alive in his brain. kept alive my him.

the man continues to stare out the window. his eyes are lowered, almost attempting to watch the tracks we roll along. they’re sad. blue. pale blue. ice blue. but sad. there’s nothing there. nothing in them. they’re empty eyes, empty eyes for the empty man. he should be full of life, his eyes full of joy, happiness, youth. but they’re not. they’re filled with despair, sadness, age. they’re the eyes of someone who has seen one too many battles, bore witness to one too many creeping shadows. i understand that. that makes sense.

as the journey progresses, he shifts slightly. his posture becomes stiffer, his back straighter. but his shoulders stay slumped, eyes stay lowered, smile stays still. the carriage rolls quietly onward. he watches the mountains pass, the rivers caressing them on their routes downward. it’s as though he’s seen them before. at times, the scent of death he emits becomes stronger. heavier. the smell of blood fills the empty carriage. he makes no attempt at covering it. no attempt at masking the scent now wafting about the cabin. maybe he doesn’t notice it, smell it. he has lived with it so long, it mustn’t smell of much now. usually, however, one would cover the scent, no matter whether he could smell it or not. the scent would be masked somewhat by a vanilla, a lavender, a calming chamomile perhaps, but not his. his is spread wide, no attempt even, to hide it. to hide the pain he seems to have suffered through.

that’s what it is. it’s the scent of pain. the scent of blood and death. it’s pain. whether it be his, or that of another, it a different story, but it is the scent of pain. perhaps that of suffering, but that’s unlikely. it’s pain. a sharp jab of a needle, the aching wound of a knife. and yet, here he is, looking through the window, acting calm. it’s as if he believes that nothing has ever happened. those memories have been shot down, down, down, deep into the crevices and creases of his memory. maybe, now, he doesn’t remember where the pain was. but it’s still raw. new. fresh. it’s current, yet far, far, far away.

so far, he has not turned. seemingly, he has not noticed my watching. my staring. he has not noticed the things i have taken in. his short, sporadic breathing, irregular and seemingly unnecessary. the fact that his body stiffens slightly as the carriage drifts to the side, turning with the path of the track. that smile. that soft, sad gaze. full of pain and memories. events from long ago. i watch him a little longer.

the sky slowly darkens with the approaching dusk. he stays watching it. watches as the sun slips below the mountains, as the sky turns from grey to pink to yellow and finally a deep, murky blue. i continue to watch him. he does not seem to notice.

‘what are you here for?’ my voice, echoing around the silent carriage, does not startle him. he does not turn from the window, darkness outside roll by. the world outside is no longer visible.
‘i’m ready,’ his voice is deep, yet somehow, soft. it’s quiet and melodic, like notes blown slowly from a flute. ‘i’m ready to go now.’

So that was a story I wrote a couple of days ago following the prompt I found on Pinterest, ‘he wears the smell of blood and death like a perfume’. I don’t know how or why, but it somehow clicked and this story was born. I’ll let you decode it as you wish, come up with your own theories and the like. But I hope you enjoyed it and it made you feel something, anything really. It was a lot of fun to write as well, which is always nice. 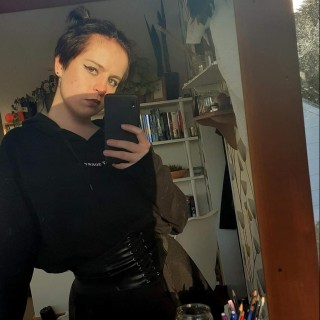